When Alastair contacted us asking us to build him a S&S coupler road bike, we were humbled as it is a massive complement to be asked to make a second Saffron for a rider.

The bike was created for travelling. We used the S&S coupler system for the ease of splitting the frame in two and being able to stick it into a small case, which makes the bike easy to fit into cars and more importantly on airplanes as your “normal” luggage. We made some slight changes from Ali’s first build with regard to the handling of the bike. We increased the head tube angle by .5 degrees and the BB height, the head tube we increased in diameter to 44mm and we stuck on an Enve tapered fork. The tubes we used for the build are a mix bag of Columbus Spirit, Zona and Reynolds 853. The reason we used Columbus Spirit tubes was to bring down the weight as much as possible. The Reynolds 853 was used on the chain stays to maximize the tyre clearance, just in case Ali gets tempted to stick on some 28mm tyres and venture down a gravel path or two.

Even though we used steel tubes the contact points on the frame are stainless steel to minimize the paint being wrecked with all the taking apart and putting back together of the bike when traveling.

The fitment was of utmost importance for this build, it took us a bit of time to get it bang on but we got there in the end.

The use of Sram Etap makes the most sense to us for a S&S coupler bike, this just means less faffing with gear cables or wires every time you travel. And not to mention that is makes the bike look clean. We like that Ali’s kept it simple and elegant for the colour choice. The colour was presented to us on a page of a magazine for an advert for a BMW. Luckily for us the guys at Colecoating knew the paint code just from looking at the picture, it turned out to be Snapper Rock Blue.

“I was finding travelling with a full sized bike box increasingly stressful. Having to fit two full-size bike boxes into a car was challenging, especially with additional luggage. Being able to pack a bike into a checkable luggage sized case meant can could travel to more places with a bike, and take a bike to the south of France from London on Eurostar for summer holidays (believe it or not, you can’t check a bike all the way through!). I wanted to have a fun, fast bike that would feel responsive. It also needed enough clearance to run wider tires for comfort. Matthew delivered.“ 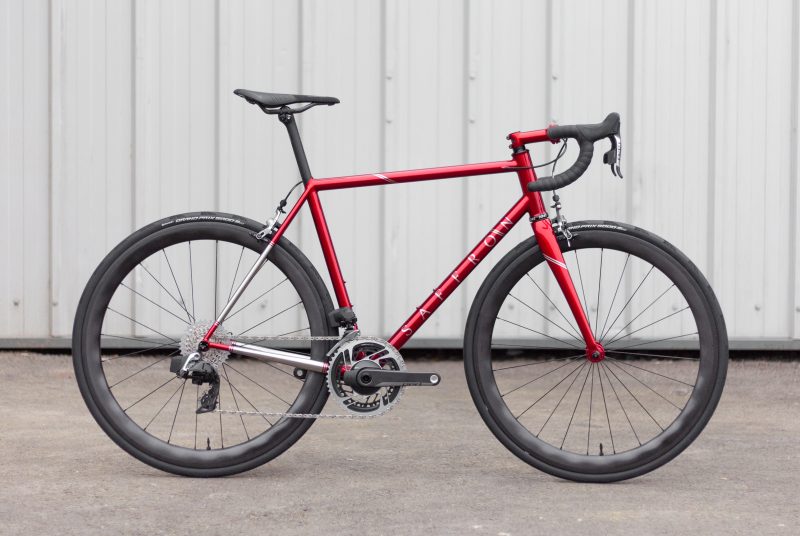