We were approached by Bulleit to work on a project that aimed to celebrate the alliance between two craft companies. The idea was to produce a bicycle that would reflect them as a brand and Saffron’s creative skills. With the design of the frame, we had complete control. The graphics and the finish was very much a collaboration between ourselves and Bulleit.

Bulleit is a rather tasty Kentucky straight bourbon whiskey, first produced in 1830. It was really great to be sought out by such an established company and to be given free range with the design of this bicycle. We decided on a gravel bike, and we used some classical old-school methods to create this very modern build.

The front of the bike is made up of a bi-laminate headtube and oversized Columbus tubes. We custom-machined a seat post shim to take a 25.4mm seat post, with the aim to gain as much comfort as possible for the rider.

The rear end of the bike is made up of KVA stainless steel with 29er S-Bend chainstays. The seatstays are Reynolds 953; once annealed, we produced a double bend in them and then put them through the hardening process.

We really wanted to bring in as much of Bulleit into the process as possible. We ended up getting a section of one of their original copper stills, which we copper-plated the front end of the bicycle in.

The paint scheme is a combination of the corn and rye buds, which come through in the exposed copper. This extends into the stainless steel at the rear end. The finishing kit comprises of an SRAM eTap groupset, with a WiFli cassette on the rear. Mounted with 40mm tyres, this results in a super comfy and super clean gravel machine.

At Bespoked 2018 we were fortunate enough to pick up Best in Show as well as Outstanding Finish for this bike. 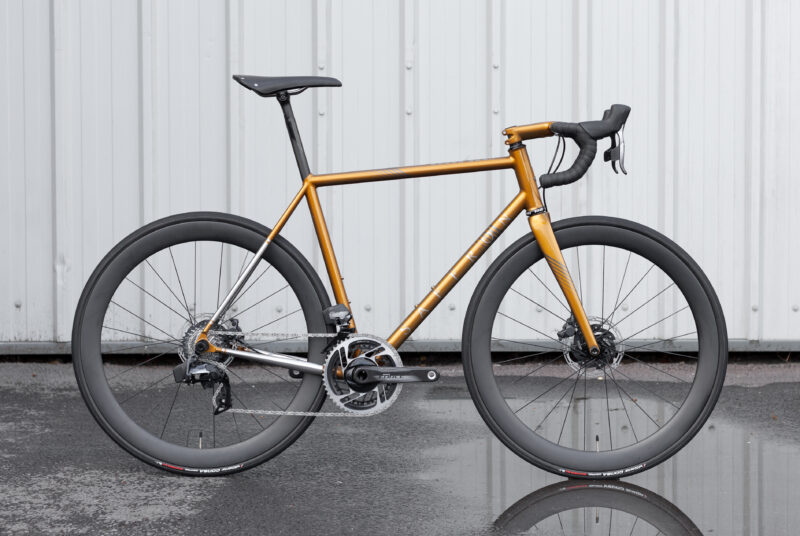