Gary is the most experienced cyclist I have ever met, let alone had the honour of making a bike for!

He comes from a very strong racing background and but has more recently taken on many cycle expeditions around the world. He’s also the on the Dulwich Paragon cycling club committee and his day job at TFL makes him responsible for much of the logistical planning which go into hosting London’s big cycling events.

I first met Gary when he popped into my workshop a little under a year ago. He arrived with a frame he’d constructed some years back and he wanted some advice on it. We got talking and started discussing the prospect of a new build.  Gary  wanted a new light tourer / audax frame with some speed.

The brief was to keep the frame as clean as possible, but to have as many add-ons to support the long touring days as possible. Important for Gary was to keep a dynamo hub on the front to powers lights at both the front and rear of the bike. He also has a USB  charger which is integrated into the top cap (not shown in the picture ) for the really long rides, where the GPS would run out battery.

Gary religiously carries 3 spokes with him on every ride. I wanted to make this a functional part of the bicycle, so I constructed a spoke-holder on the drive side chainstay and had a leather sheath made up by Hartley Cycles, which doubles up as a chainstay protector.

To keep all of these additions in the design, we split the design in two – top and bottom. We kept the top section quite modern with the selection of components, and the bottom half was a touch more traditional. It worked surprisingly well.

I got this feedback from Gary which really makes what I do so worthwhile!

“Hi Matthew, just thought I’d update you on the bike. It had its first 100k today at a blistering pace with a lot of climbing in the Downs. Awesome is an understatement! Quite the most responsive and comfortable bike I have ever had and I can’t wait to start the Paris Brest Paris qualifiers in the new year and get some serious super randonees on it – I totally love it! I’m off to Spain and Portugal for some expedition cycling until mid-October, but I would like to buy you a few beers as a thank you for your time and patience. The bike really is amazing! I hope all’s well with you. Chat soon. G” 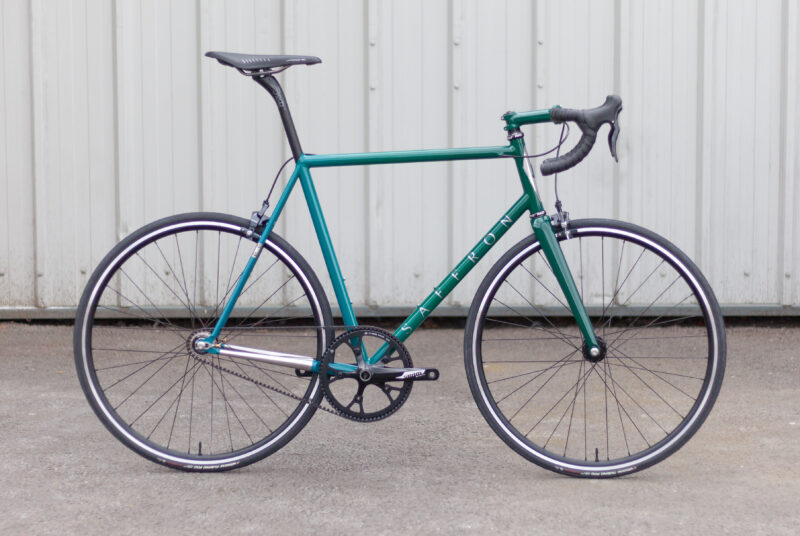